The Hawk and the Gopher 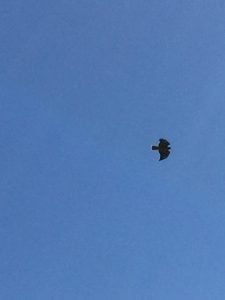 Last month, I led a spiritual retreat at an idyllic farm, tucked into a secluded valley in Half Moon Bay, California.  The focus of our day together was embodiment – being fully present, centered, grounded, and aware in our bodies and connected with the Earth.

In the afternoon, we immersed in a practice called Sit Spot; sitting outdoors, quiet and still, taking in whatever we experience from nature.

I sat on the edge of a field, facing some trees and the rising slope of a hill behind them.  There was a gentle breeze, and my gaze lifted up to the clouds floating by.  High in the sky, almost at the height of the clouds, I saw a hawk.  It was slowly gliding in circles on the currents of air, as hawks often do.  I couldn’t stop looking at it as it drifted higher and higher, further and further away over the distant hills until it was just a speck, and then disappeared from my view.

It struck me as an interesting contrast to the idea of embodiment – floating up higher and higher into the clouds, far above the earth, rather than deeply rooted in the soil, as we had much of the retreat.  Earlier in the day, in our first Sit Spot practice, I had a very different encounter with an animal.  Behind me on the edge of the field, I heard a scratching sound coming from the grass.  As I slowly turned around, a gopher poked its head above ground, grabbed some grass in its teeth, and popped back into its hole.  Several times, I saw the furry critter pop up, quickly grab a bite to eat – munch, munch, munch – and disappear again beneath the soil.

Was being embodied only about being close to the ground, feet rooted, in touch with the soil?  Was soaring above it all spiritual but not embodied?  I pondered these questions, but knew that it was all of that.  Life, and spiritual life in particular, is a paradox.  To be fully embodied – fully in this life, this thing called “my body”, this experience that is my journey – must include it all.  Neither running off into lofty thoughts and deep meditation to the exclusion of the laundry and attending to my daughter’s needs, nor attached to completing my to-do list when my yoga mat calls and my soul longs for the joys of the garden.

We are both the soaring hawk and the burrowing gopher.  If we cut ourselves off from either end of the spectrum – or the space in the middle – we aren’t fully awake and are missing the opportunity to embrace everything as it is, in this moment.  The paradox of living and the spiritual path is to embrace the mundane and the transcendent, the earthly and the ethereal, equally essential and valuable.

I lay back on the grass and took it all in; the hawk and the gopher within me.